At Houston Furniture Bank, we are often a stepping stone. We are part of a network of agencies and individuals who are providing support to those in our community who need a helping hand in order to help themselves. Being a part of someone’s transition to stability is an honor and a privilege. Recently, we had the pleasure of meeting a person who is working very hard to turn his life around.

Al is a 9-year veteran who has struggled with addiction. Seven months ago, he and his partner Jerry made the decision to get sober. To foster that sobriety, they made the difficult move to cut ties with many of their relationships and soon found themselves living on the street. The pair endured homelessness, insecurity and hunger but they also met others who were going through the same experience, who shared what little they had. “It was a learning experience for both of us,” they said.

We were buoyed to learn that as a veteran, once he asked for help, Al found that he was able to access the services he needed to start over. One morning, “tired of being tired,” he walked in the door of the San Jacinto Goodwill. By later that afternoon, he had been connected with the Salvation Army and in two weeks, he and his partner were safely housed in an apartment.

Through Catholic Charities, the pair were connected with the Houston Furniture Bank. In the Furniture Distribution Center, they were able to select the items they needed to make their empty house a home, including a bed, a table and a sofa and chairs for their living room. When furniture was delivered, we had the opportunity to meet the couple’s new rescue dog, Darla. When they found her only a few weeks before, Darla was very skinny and sick with walking pneumonia. Today, she too is on the road to recovery. “It’s another blessing,” they said. “We are giving her a chance so it comes full circle.”

Al and his partner have been working hard. They are both employed and are saving their money so that they can support themselves, get a car and move closer to their work. “We have our goals,” they said. “Little by little, month by month, we are saving up.” They are also saving up to visit Jerry’s grandparents in Arkansas who are in poor health.

Early in his recovery, Al struggled with his confidence. “Rebuilding oneself is not an easy process,” he said. “It took me a minute.” Today, he is enrolled at HCC and employed at a boutique hotel that he has helped to open. “When I interviewed I told them about my struggles,” he said. “They are giving me a second chance and I am grateful.” His partner is also working and in the process of applying to go back to school in the spring. Both have entrepreneurial dreams, one for a hotel, the other for a landscaping business. Recovery is a lifelong journey and  both go to meetings and support one another. Al is able to get the support he needs through the VA. “Michael Debakey has one of the best veteran health care programs,” he said.

Addiction affects millions of families. According to the Surgeon General, one in seven Americans will struggle with substance abuse. Each of us knows someone who has been affected. We asked Al what advice he would give to someone struggling with addiction. “Don’t give up,” he said. “Don’t ever give up. There is always hope. Don’t lose focus of your goals.” Looking back, Al tells that it’s important to remember that “This segment of your life doesn’t define you. It’s how you get out of it and move forward that matters.” Al’s story is an inspiration to all who are facing the challenge of starting anew. “It’s hard going through it.” he said, “hard getting clean. I’m good now. I’m happy. It took us a journey to reach where we are. We did it together.”

They say it takes a village. Houston Furniture Bank is proud to be a part of the team that allowed for Al and Jerry to start over. They asked for help and found it in our city’s social service agencies, far-sighted employers, veterans services, universities and the dedicated people who make that system work for those who are in need. Together with Al and Jerry, we are part of Team Houston. 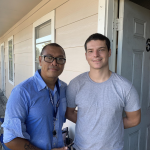 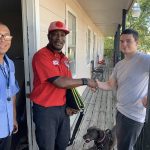 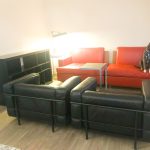 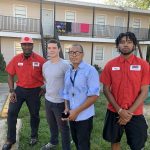